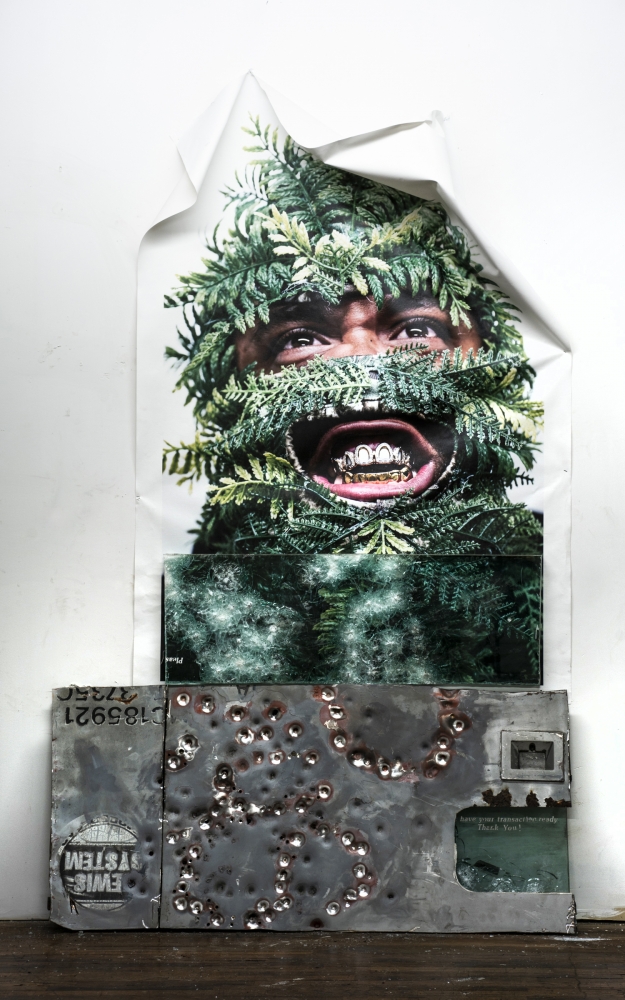 Agony. Apathy. Ennui. Rage. Major new works by the three artists in NO’s latest exhibition luxuriate and thrash around in the space between action and immobility. What does it mean to face personal and collective demons with stakes that are too high to make a move—or to wait? With equal parts commitment, exhaustion, and irony, artworks by Jesse Draxler, Jordan Weber, and Mark Mulroney imagine and critique forever-fractured interior and social landscapes while questioning the utility of received definitions and pathways for activism. This makes for bold declarations both alienated from and deeply engaged with the current moment. 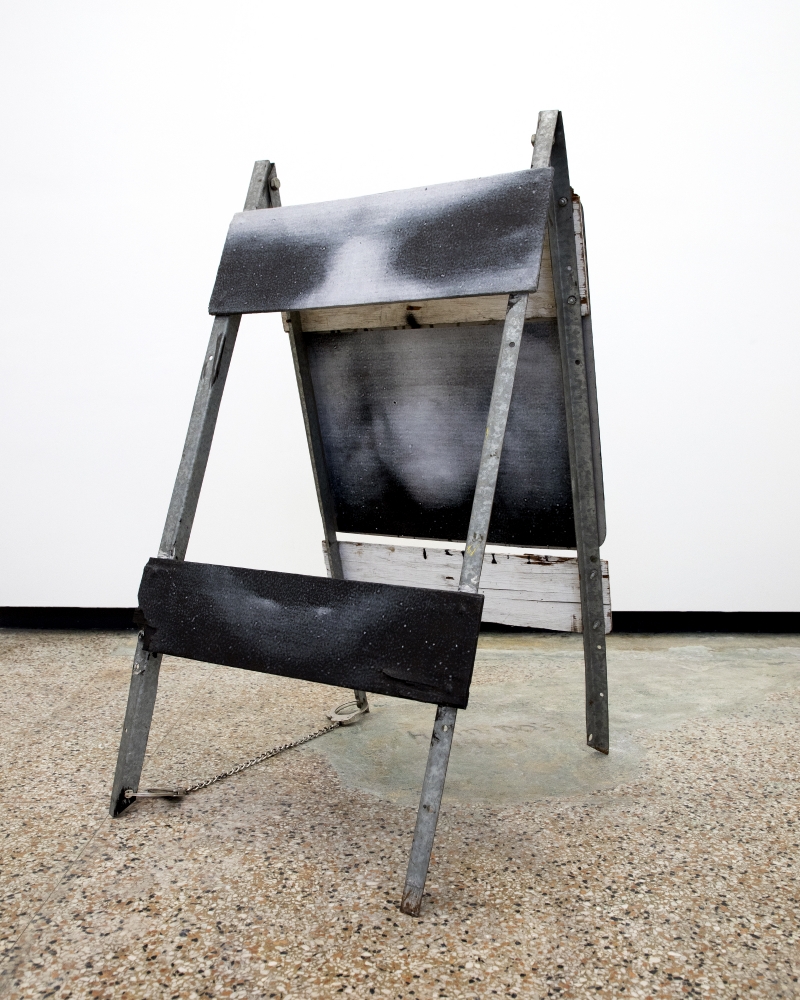 Jesse Draxler - When I Feel Anger What I Really Feel Is Self-Hatred, 2019

In “Don’t Just Do Something, Sit There,” NO is presenting Jesse Draxler’s signature collages in color for the first time as well as ambitious sculptural works that take their force and energy into three dimensions. Draxler’s uncanny photographic composites picture the disorder and fragmentation that lurks within each of us and our collective consciousness. As their splinters and blind spots extend out into space, across objects, and into language, they direct us to constant threats of rupture and obscurity closing in on us from all sides.

NO is proud to bring Jordan Weber’s work to Los Angeles, which pictures existential threats not just to the self but to communities as well. His installations assemble objects and images that are charged with social and political content: (38° 44′ 18.49″ N, 90° 16′ 25.93″ W) (2017-2018), for example, consists of a frame filled with earth from sites marked by racial oppression and resistance atop a chrome tire rim, which calls forth cycles of striving and achievement in urban America. Shined On (2019) features an image of a former gang member baring his modified teeth alongside the shot-up door and window of an armored vehicle. Together the works invoke the constantly turning wheels of repression and control that characterize “civilization” in America, and the tools used to attain and resist it. 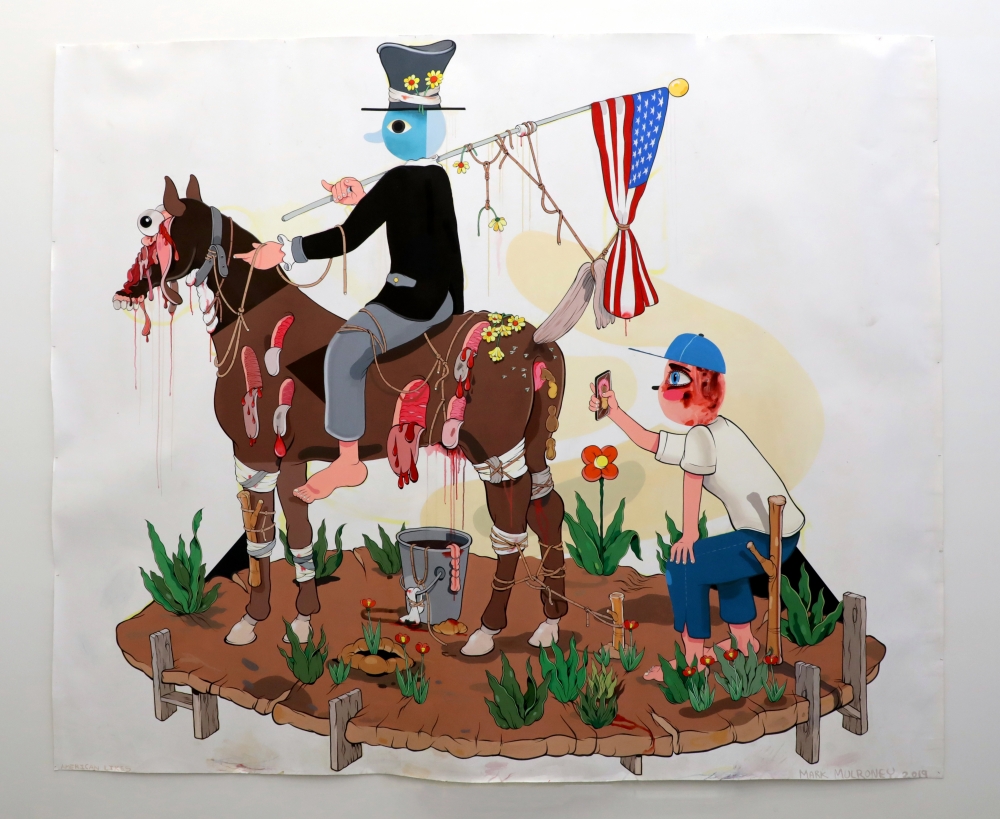 Mark Mulroney’s large-scale paintings take a satirical view of systemic failures and personal alienation, questioning the role of representation in constructing internal and external realities. NO will exhibit two mural-sized works on paper that implicate both the artist and viewers in narratives of desire, disgust, and detachment. Additional pieces playfully consider how we assemble the self and envision the other. These works and the exhibition as a whole tap into and struggle against isolation, ambivalence, degeneracy, and aggression. They can’t offer any tidy solutions for a coherent self or society—nor an approach to their ills—proposing instead the problematics of solutions themselves.

Jesse Draxler (LA) (b. 1983) fluidly transits between the art world and clients in music, fashion, and publishing. By tapping into his own shadowed experiences with suppressed memories, loss, and profound confusion, Jesse Draxler dredges up universal talismans to explore the treacherous intersect of mental health, trauma, and temper. He had solo shows at the Booth Gallery in New York in 2017 and 2016, and has been included in exhibitions across Europe at galleries in Munich, London, Paris, Hamburg, and Berlin. Draxler collaborates with brands including Hugo Boss, McQ Alexander McQueen, and Ferrari, with artwork appearing in Elle, The New York Times, The New Yorker, and The Atlantic, among many other publications. He lives and works in Los Angeles.

Jordan Weber (Des Moines, IA) (b. 1984) examines the juncture of racial, economic, and environmental oppression and is recognized by both artist and activist communities. Weber is a 2019-2020 Walker Art Center fellow and has also been a Blade of Grass fellow, Iowa Arts Council artist fellow, and an African American Leadership Forum fellow. In addition to many exhibitions, public art commissions, projects, and programs in his native Des Moines, Weber has had solo exhibitions in St. Paul, Los Angeles, and Omaha, and has been included in important group shows in New York, St. Louis, Kansas City, and Chicago. He has lectured at universities, institutions, and grassroots programs around the US. He lives and works in Des Moines, IA.

Mark Mulroney (North Haven, CT) (b. 1973) received a BFA from San Diego State University and an MFA in Studio Arts from the University of California at Santa Barbara. Currently, Mulroney lives and works in North Haven, CT. Recent exhibitions include Ampersand Gallery, Portland, OR; CG2 Gallery, TN; Mixed Greens, Joshua Liner, New York and Mrs., Queens, NY; Ever Gold and Park Life, San Francisco; Left Field, San Luis Obispo and Slow Culture, Los Angeles, CA. His work is included in Museum of Contemporary Art, San Diego, The West Family Collection and the The Progressive Collection. Mulroney had his first solo exhibition with the gallery in 2018 titled The Dangers of Eden, and a solo booth with Mrs. at ALAC in February of 2019.