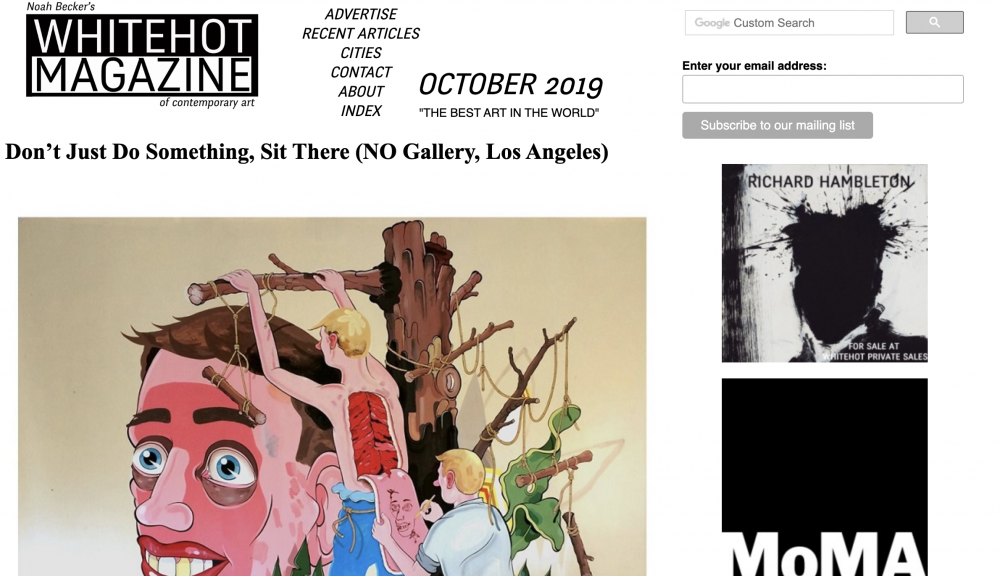 Mark Mulroney at NO Gallery
Don’t Just Do Something, Sit There
September 7 - October 19. 2019
NO Gallery, Los Angeles

To the degree that art expresses the zeitgeist, and that right now everything everywhere is a terrible, stupid dumpster fire of fear, loathing, and depression, then NO Gallery has a show for the times. Don’t Just Do Something, Sit There presents divergent works by three artists -- Jesse Draxler, Jordan Weber, and Mark Mulroney -- which achieve common ground in the mucky terrain of mental breakdown, demon-hunting, and gallows humor. It’s perfect, really.

Mark Mulroney’s paintings on paper -- both his pared-down single portraits and complex mural-size scenarios -- have a seasick-inducing saturated palette (including an especially grotesque fleshy pink) and an insidious hybrid style that is both sinister and cartoonish, childlike and absolutely wicked. Portraying in visceral, even scatological imagery the most absurd aspects of our social media driven ridiculousness, Mulroney’s figures are black-eyed zombies in a processed world. His narrative tableaux spell out the allegories of our demise. Yet the work’s rich physical presence as unlikely heroic objects and marvels of technical skill are impossible to look away from.

Jesse Draxler at NO Gallery

No less grotesque, both more explicit and more ambiguous, are the collages of Jesse Draxler. Their elegant cannibalization of glossy fashion-fetish photography takes a literal Frankenstein aesthetic from the collage technique, to disturbing, appealing effect. His sculptural works, in particular the remarkable “Hell” which affixes a cluster of steer horns to a photograph in what reads as a profound psychological portrait of possession and defiance, have a dark and talismanic quality to them, the totemic counterparts of the beings whose suffering is so eloquently chronicled in the collages.

While the earth-ad-industry mixed media sculptural objects and installation by Jordan Weber initially present as more conceptual, even Duchampian works animated by classic materials of modern art history like dirt, found objects, and plastics, in a sense, these are the most dire cautionary tales of all. For example, the earth which collects in and around “(38° 44′ 18.49″ N, 90° 16′ 25.93″ W)” was collected from Palestine, Ferguson, MO, and the birthplace of Malcolm X. In this way the symbolism of the wheel as both industrial threat and economic machine, the wheel of Ezekiel and the cycle of oppression and violence, resides equally in the materials as in the images. The earth in the bags that form part of the poured-resin composition “Portable Island” was taken from Bear’s Ears, and its juxtaposition with drug bags filled with coins from 15th-century Spain serves as a poetically stark reminder that the entire United States is an imperialist nightmare occupying stolen land.

Feel better yet? No?